Many patients with PNH have never met someone else with the condition. The PNH Scotland patient group allows patients the opportunity to meet up and share their experiences.

PNH Scotland is a relatively new charity, registered in November 2011. The charity’s objectives are to raise awareness of PNH and to ensure all patients have access to the relevant treatment they need. The aim is to provide a point of contact for patients and their families to make sure those affected by PNH do not feel isolated or unsure of the condition.

The PNH Scotland patient group meets every three months in Monklands hospital at the PNH outreach clinic. It is an opportunity for patients and family members to chat, laugh and share advice. 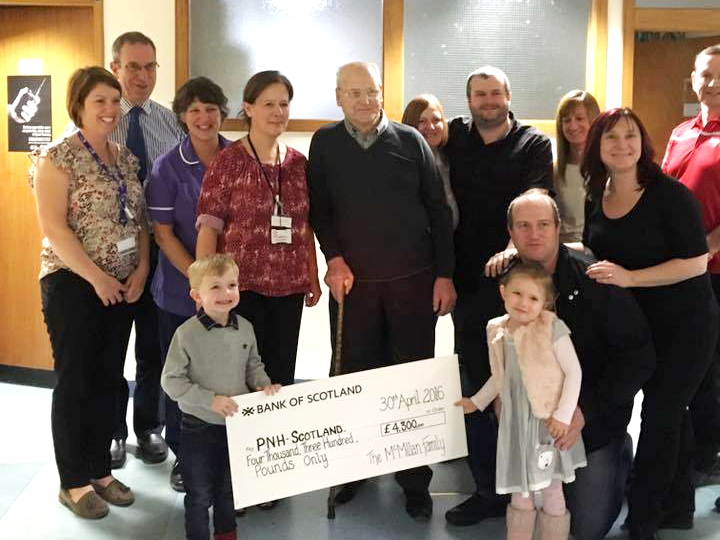 In 2005 I started to feel very run down with constant colds, sore throats and headaches. I ignored them for a few months but eventually had to go to my GP, I was so tired and I ached all over. My eyes hurt to be open and I had constant, severe headaches.

After a few months of tests, my GP referred me to a consultant haematologist. This was the start of a long and difficult journey towards diagnosis. After 11?2 years attending the haematologist, undergoing countless tests and receiving several wrong diagnoses, I was no further forward. Each test raised my hopes that I would finally find out what was wrong with me. I would anxiously await the results and feel total desperation with every negative result. Harder though were the times when I was told the tests were positive only to find out a few weeks later that they were wrong and that we would have to start all over again. These months were the hardest and most stressful of any in my illness.

Eventually I was fortunate enough to be seen by a young Registrar who was on his 6 weeks rotation. He asked me all the usual questions and then said’ “I think I know what’s wrong with you”. After 11?2 years I didn’t hold out much hope. When I went back for the results he said, “I was right, you have Paroxysmal Nocturnal Haemoglobinuria or PNH”. The Registrar had studied with a doctor who now worked with a world-renowned PNH specialist. I was in the right place at the right time to just happen to meet someone who knew about PNH and who knew where there was an expert. The following week that Registrar moved on.

On my diagnosis day, I was told there wasn’t much known about the condition and I would on average get 10 years of life. The diagnosis was not great but it was such a relief to finally know what I had. Not knowing was far worse than anything the doctor could have told me.

During the next year I was surviving on blood transfusions. The transfusions didn’t help with my quality of life and were in fact very tiring. They also didn’t protect me from the risk of a fatal blood clot; they merely stopped my blood levels falling dangerously low. We were told about a drug, called Soliris. It is not a cure for PNH but it can give patients an improved quality of life. The drug is extremely expensive and is not funded in Scotland so I was told I was unlikely to get it. It was heart-breaking knowing there was a drug that could give me my life back but I could not get access to it. Over the next year though, I started to reject my blood transfusions and it may sound strange, but this was very fortunate! As I would not have survived without transfusions, the Scottish Government thankfully agreed to fund me for the drug. I started Soliris in May 2008.

Within 6 months I started to feel able to do a lot more and since then I have gradually got stronger. The latest research shows that Soliris not only gives a better quality of life but it restores a patient’s life expectancy to normal.

Now a nurse visits me in my home every 2 weeks to give me my IV infusion, and I go and see one of the PNH Consultants at their outreach clinic at Monklands Hospital once every 12 weeks. I know that if I have any problems I can contact the team in Leeds 24 hours a day.

Once I was strong enough, I was asked to set up a Scottish PNH patient group. We held our first patient group at the start of 2012 where I got to meet my fellow PNH patients. They told me of their feelings of isolation, their exhaustion, and their fights to get funding for the drug and their fears for the future. The patient group, PNH Scotland, is now a fully registered charity with the aim to raise awareness of PNH, help provide information for newly diagnosed patients and ensure drug funding for those deemed to need it.

After a year of investigations, I was diagnosed with PNH in 2008, aged 23. The day I was diagnosed I did the first (and worst) thing we all do when we are diagnosed with an illness we have never heard of – I Googled it. Big mistake. I came across the very outdated, and incredibly frightening ‘life expectancy’ figure of ten years after diagnosis. I’m glad to say with modern medical technology this is no longer the case.

In a way, I was very lucky with my PNH, although my Clone level was slowly increasing (from 40% to around 90% over three years) I didn’t really feel that bad. I could still ride horses, go on ski holidays and work full-time. Unlike most other patients with my clone level and blood counts, I didn’t need blood transfusions. My haematology team couldn’t really understand this, but we all took it as a blessing.

In person and on paper I was two different people. They said I really should be almost house-bound, with little to no energy, not living the life I was. However, over time I did start to feel the effects of my PNH Disease, but not to the same extent as other people with my clone level (I was starting to struggle with energy levels which was starting to affect my mental well-being). Due to the risk of blood clots associated with my Clone level, and my symptoms progressing, the Leeds team made the decision to put me on Eculizumab therapy in 2013. The difference was instant. My colleagues noticed how much more energy I had and I became more confident, it made life so much easier.